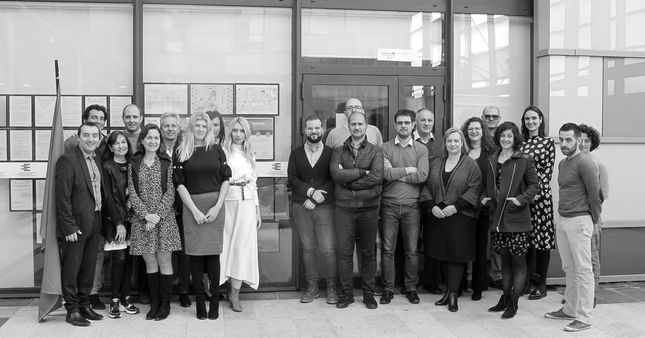 Psamides project kick-off meeting was held in Perpignan from 28th to 30th of january. This meeting represents Psamides project launched point where the rules of procedure and the steering committee members have been accorded.

The openning ceremony was held on tuesday 28th of January and was carried out by Mr. Antoni Vicens I Vicens, on behalf of the Balearic Presidency of the Pyrenees-Mediterranean Euroregion (by videoconference from Palma), Mr. Xavier Bernard-Sans, Director General of the Pyrenees-Mediterranean Euroregion and Mr. Alban Zanchiello, from Occitania Region presidency cabinet.

After the ceremony, three productive days where Psamides project partners worked hard in order to define how the project would be carried out and which would be the rules of procedure began.

During the first day, the composition of the Steering Committee and its rules of procedure were approved by all the partners. It was also developed a training session about the project’s administrative and financial guidelines.

The others two days of the meeting were dedicated to make presentations about the different work packages included in the project. Presentation were carried out by the partner leader of each work package.

Consequently, Balearic Islands Ports explained how would be developed the testing work package, which kind of innovative tests would be carried out in different ports and the schedule foreseen.

Corallia cluster, as leader of transferring work package, made a presentation about different tools the project will use in order to ensure the correct spread of its outcomes.

Capitalisation activities in the project framework were explained by Port of Sete , as a leader of this work packages.

It was also approved the project schedule.

All news
Back to top